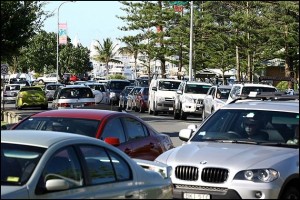 Newspaper’s across the US are reporting mass anxiety in LA due to traffic. The City of Los Angeles, one of the most car-dependent cities around, is raging as residents prepared for a 53-hour closure this weekend of a crucial segment of one of the most heavily trafficked north-south highways as part of a construction project. Hailed as Car-mageddon, according to reports the closure of the 16km section of Interstate 405, in the US’s second-largest city, the home of famously congested freeways and road rage, is sett to thrpw the city into chaos.

It brings to mind my stint in Los Angeles a few months ago. There are no words that can describe what it’s like to be stuck in Los Angeles traffic. We’ve all been in traffic jams, we’ve all been held up by car accidents on major freeways. But its the daily grind, the permanent, omnipresent congestion that drives people to despair. Eventually you run out of self help podcasts and end up ringing up a partner child or friend for an argument to kill the boredem and vent some hostility!  And we only had to do the 5 hour return trip each day over the period of a week. But a twenty minute car trip took us almost 3 hours one way, creeping, creeping along the very highway that is being closed down. It was the same on the way home. I had a hairdressers appointment and paid hundreds of dollars in Beverly Hills to look “amazing darrrrling!” but by the time I got home to where we were staying my hair was standing on end, and frizzy from the sweat of aggrevation.

So now things are going to get worse for the next few days? Worse? All I can say to Los Angeles people is that your city is beautiful, the Canyon is awe inspiring, Your beaches delicious. But my heart goes out to you for living so much of your lives in the slow lane. I can’t imagine how The Eagles even knew a “Life In the Fast Lane” existed!