By Ruth Ostrow on 19 August 2012 in All Posts, Weekend Magazine Columns 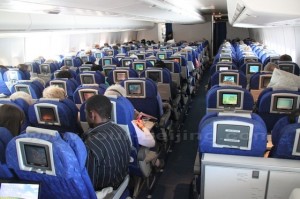 We all have it. The rage that comes from having to deal with rude  people in confined spaces. Even yoga can be a hotbed.

A passenger is facing possible charges after abusing airline staff when the woman in front of him refused to turn off her reading light during an overnight flight, it was reported recently.

When airline staff told him the woman was entitled to keep her light on, he began swearing and threatened to keep kicking the back of her seat if she didn’t do what he asked, which sounds very mature. Earlier this year a similarly nasty row erupted after a passenger put his seat back while the person behind him was eating his meal, and refused to put it forward again.

There, but for grace of God, go any of us. Who read- ing this hasn’t had — or nearly had — a heated row in confined quarters such as an aeroplane? END_OF_DOCUMENT_TOKEN_TO_BE_REPLACED