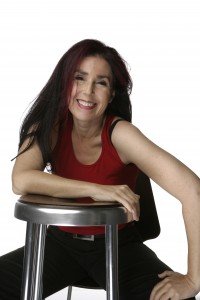 Ruth Ostrow is a Walkley Award nominated writer, keynote speaker, video-maker and social commentator in the area of human relations, psychology and wellbeing, most recently producing an acclaimed on-line documentary series Total Success. The series showed that for many business and political leaders success is about far more than financial riches or power rather care of the soul.

She is best known for her columns and features in The Australian newspaper which have been read by millions over the years, and has a host of books to her credit in the areas of sex & relationships, life matters, the secrets of business success, health and spirituality: in short, spreadsheets and bedsheets.

Ostrow trained as a leading finance journalist with the Australian Financial Review, before moving to New York, becoming famed for her writings on sexuality, gender issues and equality, later returning to her controversial radio program on Triple M and TV program on Channel 7.

She has lived an eclectic life from war zones to peaceful pastures living and working abroad as a foreign correspondent as deputy editor of the Israel Economist Magazine; and later moving to Byron Bay becoming a yoga teacher, nutritional consultant and keynote speaker on matters of Wellness. During this time she wrote 5 books. She travelled the world speaking at conferences as diverse as healthy ageing and neuroscience. Currently living in Sydney she recently got her Masters degree in multimedia, documentary-making and on-line journalism; and is also studying Art & Design at UNSW to fulfil a wish to become an artist.

Ruth’s passion is Neuroscience and she co-chaired the international conference The Mind & Its Potential.. She has lectured at the Happiness Conference on depression and has been a keynote speaker at two prestigious International Women’s Conference’s in India including the latest in 2018, and the International Conference on Healthy-Ageing and Longevity and the International Complementary Psychiatry Conference. She is an advocate for The Black Dog Institute. Her other great passion is animal welfare and she is a supporter and promoter of Voiceless, Wires and the OurEarth organisation. Her other great passion is Meditation, especially TM. She has a daughter, loves cats and lives in Sydney.

64 Responses to About Ruth