By Ruth Ostrow on 22 July 2011 in All Posts, Weekend Magazine Columns 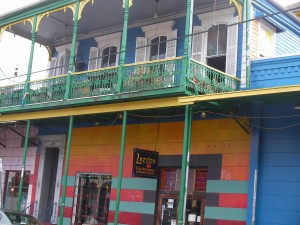 Home renos, what a pain in the butt. It’s Day Two and my nerves are already jangled. Can people answer these two questions: Why does anyone do home renovations? And how do you cope? Tell me the secret – what drugs are you on to calm you down when people don’t turn up or do something you don’t want?

AFTER a recent storm it came; dribbling down the wall, delicate as a tear drop. A trickle from my ceiling which became a stream, then a small torrent.

After a series of panicky calls, the roof expert arrived. Tiles had been damaged during the high winds, he said. Hours later he came down carrying his tools and a soggy bill. “All fixed,” he declared. But that evening, when the rain returned, I heard the dreaded drum of water splashing on the floorboards.

To my shock, the roof man refused to come back. “I checked everything. There’s nothing more I can do.” Through the night my partner and I nursed buckets, waiting for the SES emergency workers. A team arrived and workers went searching for the problem. Confused, they ended up tarping the whole roof to be safe. It was like a movie: sandbags being passed in a line and up the ladder; lots of screaming; ropes; neighbours in the street watching on. My house now looked like a ship on the high seas.

Two new roof experts from a reputable company arrived. They charged per hour, per man, to detect the problem. After a lot of stomping about, the verdict was bad. They would return and do “major work” pending approval from my insurance company. They put the tarp back but only over the area they identified as damaged. No water would come in, they assured me. That night the water came in. No, they wouldn’t come back to put the tarps back where the SES had them, because they were right and the leak was wrong. I called someone else.

A lovely man arrived. A self-employed, salt-of-the-earth bloke. He jumped up on the roof and immediately shouted, “Here’s our problem love!” Regardless of tiles dislodged, there was a crack made when something heavy hit the roof during the storm. So small, it was missed by the big boys who were searching for the dramatic, the mega. He said he found it by looking directly above the leak (Duh!). After it was sealed, he hosed the area to check the job was done (how logical) and yelled, “She’s right!” And she was.

There are those who think simply. Live simply. Fix things swiftly. No baggage, light on their feet, they resolve matters easily, plugging the leaks of life – be they in roofs or relationships. I’m reminded of this tradesman each time it rains on me, literally and metaphorically. It reminds me of an adage I once read: “A big problem is just a small problem that wasn’t handled properly at the time.”

Tell me your renovation horror stories