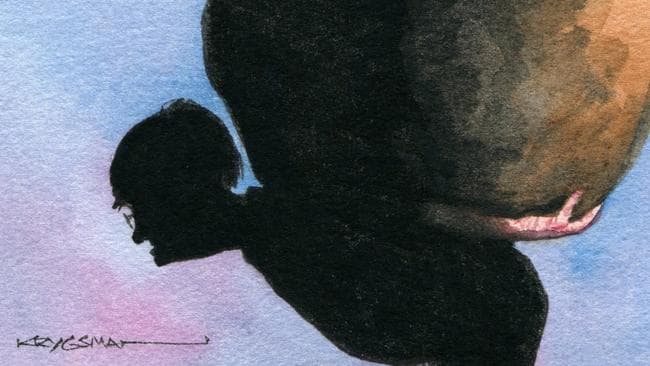 No, it isn’t about things we could have done to make our own lives better. It’s about the people whose lives we didn’t make better.

A friend was speaking to me the other day. She has everything in terms of a loving family and comfort. She likes her job and is still happy with her partner. But when we talked about what we most regretted, she opened up.

“I have never really forgiven myself for how I treated my mother before she died. We could have let her come live with us when she was sick. But I didn’t feel it was possible. I think often about the nursing home, and how unhappy she was … I see other people home-caring their parents. Why couldn’t I?” she said, visibly shaking.

At a self-help group a man talked about his relationship with his father. “He wasn’t a great father,” he said.

“But I never appreciated the good things he did do and never told him how important he was. Now I’m in therapy, I can see that I was pig-headed and misinterpreted a lot of stuff. Things aren’t black and white. It was such a waste, all that anger.”

For myself the regret goes to the core of my being. Yes, of course I have the usual “kicking myself” ones — opportunities not taken or recognised that would have improved my own lot.

But these regrets make me angry at myself, whereas the deeper ones actually physically hurt. Like a girlfriend I argued with who died of a sudden, aggressive cancer over the time we were estranged. I regret not spending more time with my nana and papa before they died. I regret not doing more for suffering animals.

There are many people we neglect along the way, stupid fights that need not have happened, things never said or said. A time we didn’t stand up and speak for what was right. You can’t tell me there is anyone who meets their maker with no regrets.

So what is there to do? As we approach the new year we can only forgive ourselves and begin anew. Do what we’ve been taught to do for others: “forgive them, for they know not what they do”.

I would do things so differently now. But there’s no door back. The truth is, wallowing in guilt takes up energy we could be channelling into caring for others in the present. Our shame can paralyse us into inaction.

To that end, not forgiving ourselves is itself unforgiveable.

COMMENTS REPRINTED FROM THE AUSTRALIAN NEWSPAPER

FLAGSHARELIKEREPLY
Jeff
Jeff DEC 20, 2015
Thank you Ruth. I am one. Inconsolable. Your article has helped me.

FLAGSHARELIKEREPLY
Phil D
Phil D DEC 20, 2015
Well Ruth they say that life is what happens while you are planning to do something else.

And whose to say that if you had done the things that you now think you should have, it might have turned out worse than what they ended up being; if you follow the gist of my argument.

Like the old mate Forrest Gumps Grandma said: life is a box of chocolates, you never know what you are going to get.

Though of course with Australias more stricter labelling laws the contents of any box of chocolate should be accurately reflected in the label!
FLAGSHARELIKEREPLY
Denis
Denis DEC 20, 2015
I believe that most of us do carry the burden of some regrets – the things said or not said, the actions done or not done. Surely the most painful element is that it is too late to put things right, to change the scenario. Yet if we are willing to forgive others for their slights to us we should be willing to forgive ourselves. We know that we are sorry, that we sincerely repent.

On a lighter know perhaps most of us could write a book entitled “Stupid Mistakes I Have Made.”

We could classify the mistakes under the following headings:

1. Mistakes made through inexperience.

2. Mistakes made on the basis of false or incomplete information.

3. Mistakes made under emotional stress or fatigue.

4. Mistakes made in trying to choose the least worst option.

5. Mistakes made by completely misreading the situation.

6. Mistake made following an impulsive decision.

7. Mistakes falling under the general heading of “How could you be so stupid!”

Finally may I observe that acknowledging our mistakes keeps us humble and certainly less judgemental when some other human being makes a mistake through human frailty. We share our flawed humanity.
FLAGSHARE2ZinniaRussellLIKEREPLY
Steve
Steve DEC 20, 2015
Excellent article Ruth, you hit the nail on the head. I’ve noticed over the years many, especially high profile people state that they have no regrets in life. I believe this is to not be human, by forgiving ourselves and others we can, as you say begin our life anew. Also maintaining anger or hate take up too much energy and is usually one sided and delay us from living a generous and loving life. What you give is what you get. They are my observations of 50+ years of life.

Not using the words “I, me, myself” often enough, perhaps? Not being able to look up the words “self-absorption”?