By Ruth Ostrow on 9 July 2012 in All Posts, Weekend Magazine Columns 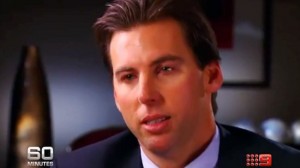 THE Grant Hackett interview on the Nine Network’s 60 Minutes made me contemplate shame versus guilt. One has conscience one doesn’t.

As most people know by now, Hackett talked of his terrible embarrassment at trashing his home, and what has amounted to sabotaging his career, marriage and reputation so publicly.

As I watched, I wondered what exactly it was that was shaming him. Was it his actions? Was he ashamed of acting out so violently? Or rather the fact that socially he was now a pariah and seen in a poor light?

Which got me wondering about the difference between shame and guilt. As a chronic sufferer of guilt, I tried to break down the thin line that divides the two feelings. I’m constantly stalked by guilt. My favourite form of self-torment is that I’m not a good enough mother. I don’t want to debate whether I am or not, just that I tend to focus on my inadequacies, not my triumphs, when it comes to parenting. I also feel profound guilt if I don’t call my own mother, or if I hurt someone, or am not there for a friend in need.

Guilt is a normal part of being Jewish, as in the cliche of the Jewish mother’s brainwashing of her son: ‘‘I’ll die and you’ll be sorry!’’ coupled with our genetic pre- disposition to negative self-talk. Which is very different from shame, derived from being seen to have done the wrong thing. Shame, like embarrassment, comes from earning social disapproval, and is usually based on early conditioning by parents, teachers and priests. Because I tend to stumble along without much to what people think of me, shame is far less an issue. When I ran my sex program on Triple M radio, I earned the antipathy of the then Howard government. I was named and disgraced in parliament for daring to air issues in society that were never discussed. I felt no shame at all. Just anger at the hypocrisy.

But millions do feel shame. The whole new social phenomenon of Facebook posts, which can cause social mockery based on naming and shaming, is now considered bullying and there’s finally a backlash against such damaging behaviour.

Back to Hackett. I don’t mean to imply guilt is a better emotion than shame, or that it’s healthy. Guilt corrodes the insides more than drinking acid. But it shows a conscience, whereas shame tends to show a need for acceptance — which is in fact necessary for social species such as humans, elephants, or apes, whose members need each other to survive in the wild. But I believe it lacks self-awareness.

Does Grant also feel guilty for his aggressive actions? We may never know. But it strikes me as being at the crux of whether he’ll be truly forgiven or not.

Blog your responses below

Fear of Feelings
Time to be bad

5 Responses to Shame and Guilt