By Ruth Ostrow on 21 October 2012 in All Posts, Weekend Magazine Columns 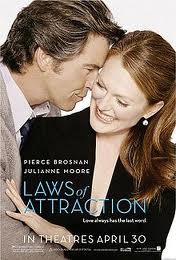 TWO separate incidents within three hours of each other got me thinking about the nature of attraction and repulsion. I was in a cafe, perusing the menu. A particularly nice, young waiter came over and was talking me through my options. But somehow between ‘‘banana bread or omelette’’, an extraordinary conversation sparked up.

We were suddenly traversing landscapes of the soul, not just what he and I were doing with our lives but how we felt about what we were doing; our families; Australia; the nature of people. Despite being of vastly different ages and ethnic backgrounds, there was a familiarity that made me feel I had known him forever.

Conversely, a few hours later I noted a similarly strong reaction, but this one being repulsion. A salesgirl was okay with me, but had a bad reaction when my mother came over. The young woman winced visibly as my mother gave her opinion on a few of the products I was trying, and walked off to serve someone else mid-sale.

The degree to which we can so easily form a passionate bond with one person and a rather extraordinary dislike for another is the stuff of much psychological speculation. Watching the encounter between the young woman and my mother, I wouldn’t have needed to be a rocket scientist to see that there were authority issues from childhood the girl had not resolved. This is the most common psychological explanation for picking favourites.

Reactions to strangers are often a projection concerning the father/mother or sibling we did have, or the one we wanted to have. There are other biological theories to attraction/repulsion. Smell is a big one. A familiar scent can trigger profound attraction or dislike Perspiration can remind someone of a treasured father who came home from work smelling that way. There are several studies revealing that men find women more beautiful when the females are approaching ovulation, clocking into the scent of the menstrual cycle and perhaps other sensual cues, too.

There’s the theory of imperceptible micro- expressions that communicate our true feelings to strangers. Then there is the theory of NLP — Neuro Linguistic Programming — a system that touts that consciously mimicking/mirroring a stranger’s body movements and sentence structures can create empathy and familiarity, hence the technique is used often by sales people.

I don’t know what attracted the lovely, young waiter to me, or vice-versa. But it ended up that we did share a world view that justified the intimate initial bond. It’s these mysterious encounters that are the most fascinating to me in my exploration of the human psyche, and the most inspiring.

One Response to The Laws of Attraction