By Ruth Ostrow on 29 September 2012 in All Posts, Weekend Magazine Columns 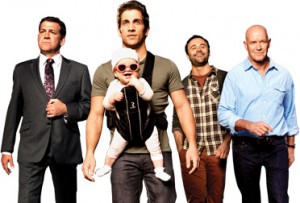 Women  told SAHDs will cheat on them putting feminism back 20 years.

I HAVE taken umbrage at a recent article by writer Vicki Larson, blogging in OMG Chronicles and Huffington Post about stay at home dads. Apparently the new warning bell issued by women for women is that SAHDs are more likely to cheat. Where, oh where, has female common sense gone on this one?

For those who haven’t caught on yet, SAHDs is being identified as a new social phenomenon. There are an estimated 1.4 million fathers at home and taking care of children full-time in the US, according to a study by Appalachian State University, although this figure is debated. The new Australian TV show House Husbands is a ratings success.

Larson quotes Christin Munsch, a postdoctoral research fellow at Stanford’s Michelle R. Clayman Institute for Gender Research. She (Munsch) claims the more economically dependent a man is on his wife, the more likely he is to cheat.

Munsch claims when men are forced into dependence on women’s incomes, like being involuntary SAHDs due to economic factors, they feel emasculated. ‘‘Because breadwinner status is an important component of masculinity for married men, economic dependency may threaten masculinity. Given the symbolic importance of virility and sexual conquest to cultural definitions of masculinity, having multiple sexual partners may be an attempt to restore gender identity in response to these threats,’’ she says.

Not me.I was the wife of a man who was a SAHD for a while, and it was wonderful. My ex-husband’s career in the finance industry hit a wall for a couple of years. No, he didn’t feel emasculated by bringing up his daughter. He was thrilled to have a hiatus in his bread- winner life and says it enriched him profoundly. I was given the opportunity to work during my 30s when careers also need nurturing, and felt blessed.

Generalisations do my head in. Not all men are hung up on the concept of being masculine in the ‘‘traditional’’ way, even those who are involuntary SAHDs. And men come from many different generations with different values, remember?

I feel offended on behalf of men, but depressed on behalf of women, that we’re being led to fear something that is so beneficial. What’s happening these days? In the US, Republicans are trying to set women back 100 years and then ruminations like this? I remember the 1990s catchcry ‘‘real men don’t eat quiche’’. It was a joke back then. I’m not smiling now.

The Sandwhich generation and Gen X-austed
Couch Potatoes Are In