By Ruth Ostrow on 6 May 2012 in All Posts, Weekend Magazine Columns 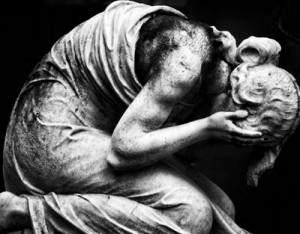 One mother’s attitude to grief after the death of her child is causing controversy.

Last year I received an amazing letter from Julia Bianco-Garrouche, a woman who recently appeared on Insight talking about grief following the death of her daughter. It was in relation to a column I  wrote about being criticised. I was the first journalist she’d talked to.

“We had moved to Sydney for my husband’s job and had been there about 18 months. Living in Paddington was starting to take its toll on our vivacious and free-spirited daughter, Yasmina, who at 9- years-old, felt cooped up in the terrace. So whenever we came back to our house near the beach north of Wollongong, she would fling open the front door and take off to explore, breathe the fresh air and let her imagination run wild.”

“Disaster struck when her imagination took her too far. Playing spies, she spotted a pink torch lying on the tracks at a nearby railway station. Being a daring child she climbed down not realising the danger of the trains. Unlike the old red rattlers, silver bullets suddenly appear with 5 seconds warning. She was hit instantly.”

Many criticised Julia:  “They’d say: ‘Why on earth was she allowed to go up there?’ I should have known where she was at all times. She should not have been allowed out of my sight!”

“I don’t regret my decision to let my daughter out to play. She would not have wanted anything else. In the short life she had, she was happy, free spirited with an imagination that could not be entertained by a computer game. She should not have been on the tracks, but her sense of adventure took her there and there was no way I was ever going to be able to keep her locked up.”

Some have criticised Julia again after her appearance on Insight because she has accepted the death of her child to the extent she has moved on. She said on TV that despite initial feelings of suicide and overwhelming pain, she knew Yasmina would not have wanted her to grieve. She also made the point that no one knows how long another’s life is supposed to last, and their time with us is a gift.

She told me: “Acceptance is something that I’ve learned from experience. Destiny too. Both have allowed me to find peace in what has happened and to know that Yasmina is safe and happy. Our backpacking trip to India to commemorate her 10th birthday helped a great deal on our spiritual journey. Yasmina’s energy was there and continues to return.

Far from deserving criticism Julia is an inspiration in her decisions. She’s now becoming a grief counsellor. Without knowing it she has already counselled me in how to deal with my own losses just by being so profound and spiritual in her attitude to life and death.